Anatomy of the Drosophila adult midgut

1- Anatomical description of the digestive tract

The Drosophila adult gut is composed of three main parts: a- the foregut, comprising the oral cavity, the esophagus, the Crop (depicted in the photo below), and the cardia; b- the midgut; and c- the hindgut. The fore- and hindgut have an ectodermal origin, whereas the midgut has an endodermal origin. The cardia is a valve-like organ at the junction between the foregut and the midgut that secretes the peritrophic matrix. The cardia is separated in two parts: the ectodermal proventriculus and an endodermal part that constitutes the most anterior part of the midgut (that we named R0). Malpighian tubules, which play a role analogous to the vertebrate kidneys, connect the gut at the midgut-hindgut junction.

To determine the position of each region, we normalized the midgut length to 100% starting around the middle of the cardia (where the gut tube is composed only of endoderm: see photo) and ending at the midgut-hindgut junction, where Malpighian tubules branch. 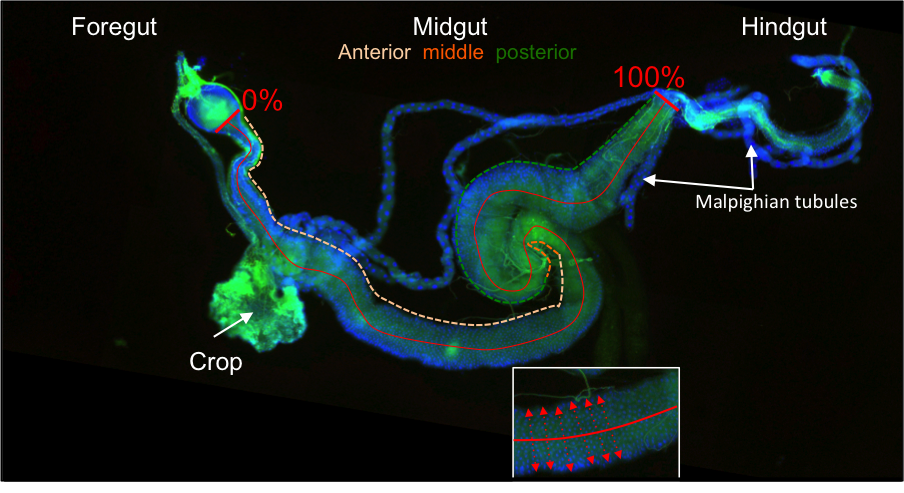 2- Morphological analysis of the Drosophila midgut

a- Morphometric analysis of the midgut b- Organization of the midgut in 3D Based on gut morphometric measurements and histological sections of whole flies, we reconstructed a 3D model of the midgut. The set of points defining the gut model can be found here. Then, different types of features can be mapped onto this surface and rendered in user-frienly 3D views (such as anatomical features, see below; histological features or gene expression pattern features). We then projected the five regions and their boundaries on the 3D reconstruction. The 3D view reveals that boundaries are located to specific anatomical coordinates: BR1-R2 is at the junction thorax abdomen, BR2-R3 is the most ventral point of the gut, BR3-R4 is the most dorsal point of the gut, and BR4-R5 marks the beginning of the midgut ascension towards the hindgut. Altogether, our anatomical data indicate that:

Click on the picture below to activate the 3D view.