Below you can find a global statistical analysis which summarizes our microarrays results. 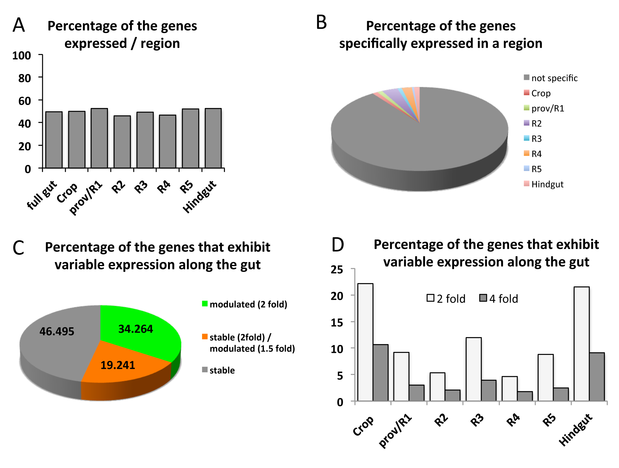 (A) Statistical analysis of the microarray data indicates that approximately half of the genome is significantly expressed in the gut and in each gut region (3 Affymetrix present call\ s for 3 chips).
(B) This figures indicates the proportion of gene enriched only in one region. 10% of the genes were enriched in only one region and down-regulated in other regions are considered to \ have a region specific expression.
(C) 34% of the genes is differentially regulated in distinct gut regions by at least 2 fold, and up to 53% by at least 1.5 fold.
(D) These histograms show the percentage of gene enriched in on region compared to the entire gut. The crop and the hindgut show a high number of regulated genes compared to the midgu\ t indicating a dichotomy in gene expression between the ectodermic (crop & hindgut) and endodermic (midgut) section of the gut.